Babu and Fluffy the Kitten


Babu was like any other little boy of his age; tall, thin and charming with bright eyes and prominent ears. He went to school, played with friends, and did all the small things boys of his age were doing. He threw the same types of tantrums like his peers. Most of all, he disliked when his parents told him to do things, and felt that they are troubling him unnecessarily.

At the time of this story, having a pet had become a fashion among children. Babu was no exception, and he yearned to have a pet, preferably a cat. Fortunately, his friend Vinay, who lived close by, had a cat by name Ginju.
Ginju was a handsome female with golden brown stripes over her body, and was about to litter any day. So Vinay suggested that Babu ask his mother, Meena aunty to let him adopt a kitten.  After due deliberations at home, a delegation led by Mohan anna was dispatched on the “mission” and succeeded in convincing Meena aunty that Babu would look after the kitten well.
So, the boys were anxiously waiting for the D-day, which was fast approaching. One fine morning, Vinay banged on the door to inform Babu the happy news ­- “Ginju had littered”.
There were five beautiful kittens; and Babu chose the one with grey stripes and fluffy fur. It was a Tom and he named him “Fluffy”. 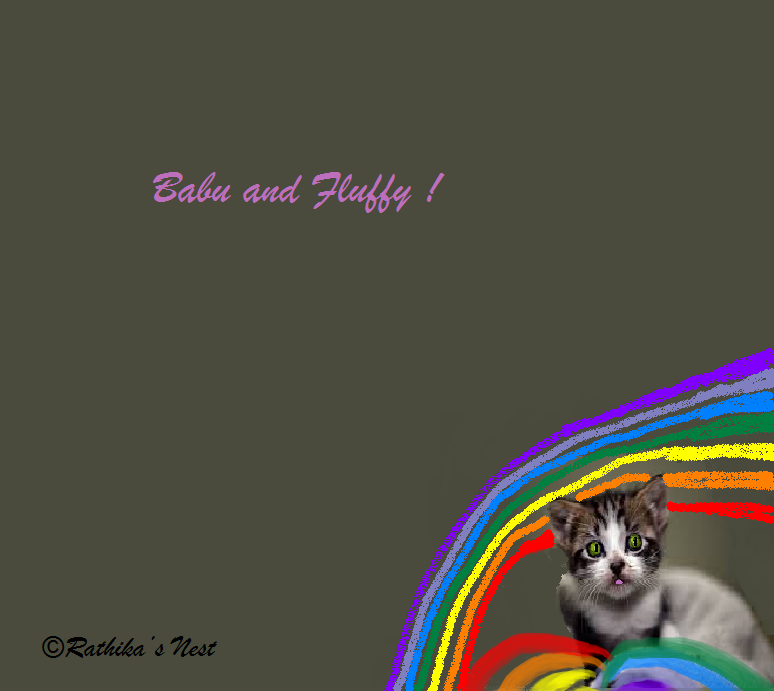 Babu visited Fluffy every day at Vinay’s home. Ginju did not let the boys come near the kittens. However, they enjoyed watching the tiny kittens feed and sleep most of the time. Slowly the kittens started to move around, though the mother was very protective. Finally they started playing and the mother was comfortable letting the boys touch the kittens.
After a week or so, Meena aunty announced that it was time for Babu to take the kitten, and Fluffy arrived home to a warm welcome. Mama prepared a cozy corner in Babu’s room with old clothes for Fluffy to sleep and Papa got the litter tray ready. Fluffy was slowly getting used to the new surroundings. He drank milk from the tiny bowl and played with Babu happily. In the night, he slowly climbed on to Babu’s bed for warmth. Every day after school, Babu would take Fluffy on his shoulders to the corner of the compound with a grassy patch, where Fluffy played with gay abandon.
One day, Ginju came through the window to visit Fluffy. She simply sat and watched Fluffy play, which was indeed very happy to be with his mother. The visits became regular and it appeared that Gingu was not playing any more, but to Babu’s great dislike, she was taunting and teasing Fluffy. He often tried to shoo her away in vain. One day, Ginju jumped out of the balcony and urged Fluffy to follow suit, which mewed incessantly out of fear. Nevertheless, Ginju wouldn’t let go until Fluffy managed the task. Then Ginju climbed up the wall into the balcony, but Fluffy couldn’t make it as it was too high. Dismayed, Babu rushed to Fluffy’s rescue.

“Mama… Ginju is torturing Fluffy…” He complained bitterly to his parents.

“Ginju is training her little one”, said Mama soothingly.

“Oh, he is doing just fine by himself” grumbled Babu.

Papa smiled and said, “How do you know? It is not possible for us to know all that a cat needs to learn to survive…”

Despite Babu’s displeasure, Ginju’s ministrations continued until one evening when Babu found Fluffy climbing up the wall all by himself into the balcony. Slowly, Ginju stopped visiting Fluffy and started going in her own way.
A fortnight had passed… It was a pleasant evening with the setting Sun providing the right warmth and the gentle breeze ruffling the leaves.  Babu, having had his fill of evening snacks, was playing with Fluffy near the window. Colonel Pratab came along with his dog, a Doberman called “Ripper” - a ferocious dog known as “Killer “in the neighborhood. Colonel Pratab held Ripper tightly on leash and started talking to Papa. Ripper, who was lazily looking around, got quite exited seeing Fluffy playing with a small ball.
Suddenly, without warning Ripper unleashed himself and charged after the kitten. Feeling petrified at the sight of the huge dog, Fluffy started running helter-skelter.

It was total confusion for a minute or two with Ripper chasing Fluffy, and Babu and Colonel Uncle going after them.Fluffy reached the rear wall and it was dead end… All the bystanders feared the outcome….And then suddenly it happened…
In no time, Fluffy climbed the wall and charged through the window at good eight feet height. Babu ran into the house and retrieved the shivering kitten from under the bed. Mama fed him some milk and it took quite some time for Fluffy to recover.After Colonel Pratab took leave with agitated Ripper, Papa entered the house.

He gave a knowing smile and asked Babu, “Now do you understand why Ginju was so hard on Fluffy?”…  Mama hugged him lovingly and it said it all.

As Babu took Fluffy out to his favorite grass patch, he was feeling quite relieved and peaceful…He told himself “I won’t grumble anymore if Papa and Mama ask me to do something… because, there is always a reason behind it… even if I don’t know it now, I will eventually know the reason”…He stroked Fluffy the kitten gently… his best friend indeed…

28-Dec-2010:  "Babu and Fluffy the Kitten" was published on Writershideout.net

Email ThisBlogThis!Share to TwitterShare to FacebookShare to Pinterest
Labels: Story