Most women consider the kitchen to be their personal work space. Hence, while setting up the kitchen, the equipments, utensils and storage containers are chosen as per individual tastes and preferences. However, some utensils are considered essential and are frequently used in Indian households. I have tried to cover some of these utensils in this section. Hope you find the information useful.

Kadai, called 'Karahi' in Hindi is a thick, deep cooking pot used extensively for making curries. Kadai is also useful for deep and shallow frying. This is available in varying sizes, with or without lid and with or without handles.


Ideally a kitchen should have at least two kadais to optimize the time spent on food preparation.

You may get kadai made of clay, cast iron, aluminium/alloy or stainless steel. Non-stick coated and copper-bottomed varieties are also available.


It is preferable to have separate kadai for deep frying.

Handi is a deep cooking pot with a narrow mouth used for making gravy preparations. You may get Handi made of clay, aluminium/alloy or stainless steel. Non-stick coated and copper-bottomed varieties are also available.

Traditionally spices for seasoning are heated in a cast iron hollow ladle (இலுப்பை கரண்டி). Nowadays, spice pans are available with heat proof handles and are made of aluminium/alloy, stainless steel, or hard-anodised metal. Tadka pan is a frequently used cookware in an Indian kitchen.


Saucepan (உலோக கலம்)
Saucepan is a shallow, round pan with long handle, with or without a lid. It is available in stainless steel, aluminium/alloy and non-stick coated metal. Saucepan is useful to cook small quantities of food.

Kuzhi paniyaram (குழிப்பணியாரம்) is a typical South Indian breakfast/ snack item that is made in a special pan with hollow moulds. Traditionally pans made of stoneware or cast iron were used. Batter is poured into the moulds and the paniyarams are turned with a wooden stick to ensure uniform cooking. These days non-stick paniyaram pans are available in the market.


Dosa is one of the most common breakfast preparations in South India. Common dosa tava is a round griddle, which is slightly hollow at the center. It is made of cast iron or aluminium, with or without a handle. Tava can be used to make adai (அடை ), dosai (தோசை) or uthappam (ஊத்தப்பம்).

Flat round griddle is usually preferred for making chappati/ roti. Cast iron or aluminium flat tava is available with or without a handle. Tava may have slightly raised edges which prevents cooking oil/ ghee from spilling over. Though the same tava can be used for making dosa and roti, it is preferable to have two separate tavas for getting best results.

'Appam' (ஆப்பம்) is a delicious South Indian breakfast item, prepared in a specific way. Appa kadai is a shallow cooking pot with handles and a lid. Though a common kadai may be used for making appam, it is preferable to use an appa kadai for better outcome.
Idli Mould (இட்லி தட்டு)

Idly is the most popular South Indian breakfast item. Traditionally idlies are steamed in a mould kept inside a closed vessel (இட்லி குண்டான்). Idly mould is available in varying sizes starting from single plate with 3-5 moulds. Idly cooker may be used for steaming. Alternatively, you may use the pressure cooker or rice cooker. Microwave safe idly mould is also available for using in a microwave oven.

Idiappam stand can also be used to steam dokla and plate idlies!

Commonly used spoons and ladles are shown here. Numbered from left to right -

Numbered from top to bottom -

In olden days brass spoons were used in the kitchen. Now, all spoons and ladles are available in stainless steel. Wooden spoons & ladles are useful on non-stick cookware.


Even though, mortar and pestle cannot be categorized as utensils, I chose to include them in this section as the pair makes a very useful kitchen equipment. The mortar is a heavy bowl made of stone, metal or ceramic, while pestle is elongated round ended object for pounding the ingredients.Traditionally, mortar and pestle are used in the kitchen for powdering small quantities of spices or making pastes such as ginger, garlic or green chilli paste.

Idlies can be made in different shapes depending on the mould that is being used. Mini idlies, which are less than 1" in diameter, have become quite popular. After filling the mould with batter, you may use idly cooker for steaming. Alternatively, you may use the pressure cooker or rice cooker. This standard mould consists of four plates with each plate making 18 mini idlies.

Somas mould, used to make the traditional sweet somas, is available in aluminium, alloy or even plastic. It has two concave sides connected by a hinge. The dough layer with filling is placed inside and the sides are  pressed together to get the correct shape.

This mould is used to shape kozhukkattai, a traditional steamed snack. It has three concave sides connected by  hinges. The dough layer with filling is placed inside and the sides are  pressed together to get the correct shape.

Traditional kitchen press has two parts. The outer part is hollow with a detachable bottom holding the sieve. The outer part holds the flour paste and inner solid part is used to press the flour through the sieve (அச்சு). Sieves have different type of holes and you can change the sieve based on what you are making. Sieve with many small round holes, is used for making idiâppam (இடியாப்பம்) and sev (ஓமப்பொடி). Other sieves are those with star shaped holes (முள்ளு தேன்குழல்), big round holes (தேன்குழல், காராசேவு) and slit like holes (ரிப்பன் தேன்குழல்). They are used for making different types of savories. 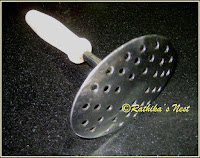 Vegetable mashes has a sturdy stainless steel base with holes or slits. The base is attached to a handle, which may be metal, plastic or wood. It is preferable to buy a masher with a heat proof handle. Vegetable masher is particularly useful when you need to mash the cooked vegetables or pulses for recipes such as potato masala, vegetable kuruma, dhal, and channa masala.

Email ThisBlogThis!Share to TwitterShare to FacebookShare to Pinterest
Labels: References